The history of the Company “Pietro Chiesa”

For over a hundred years in the Port of Genoa

The history of the “Pietro Chiesa” has its roots in the powerful and feisty workers’ movement that grew amongst the Dockers in Genoa at the end of ‘800.
At that time there were more than 7,000 people working on the docks and the merchandise exchanged was mainly coal.
In 1900 there were approximately 3,500 coal workers, divided in porters, loaders, unloaders and weigher/collectors.
The working conditions were tough and the strength relations were extremely adverse.
This is why the carbune’ were fighting, following two main ideals: one to become part of a more vast and “upper class” movement; the other was to become a more upfront movement with high professional abilities.

Their first objective is translated in the constitution of the “Union of Labor”(following the example of the Chambre du Travail in Marseille); the second sees the evolution of the older societies for mutual succour in to actual associationism organized as a co-op.

The circumstances of the Union of Labor are now part of history: constituted between the 5th and 6th January 1896 by an assembly presided by Pietro Chiesa (the first “blue collar” representative at the Italian parliament) has been closed down the same year by prefectorial order (on the 8th December); re-constituted on the 20th July 1900, has been defended by workers at the docks from a new attack by the government representatives.
The subsequent strikes were so powerful that created a major impact on the balance of national politics, and subsequently caused the fall of the Saracco Ministry.
From this fall starts the new reformist course associated to the figure of Giovanni Giolitti.

The history of the Associationism of employment is much more articulated.
Luigi Einaudi wrote: “the workers at Genoa’s dock have always had the tendency to join in to co-ops to safeguard their own interests and to establish wages and other working conditions”.
There are elements that would make you think that workers unions existed in the Genoese dockland since the XII century, even if the first statute is traced back to three centuries later.

Regarding the coal worker organization, in 1982 the “Confederation for the improvement amongst the coal workers” was founded, with the aim to obtain more fair wages, the introduction of shifts and the abolition of the arbitrary power of the so-called “Confidings” (corporals and defenders of the employers counterpart).
Following the track of this first experience, the “Union of the coal loaders” and the “Union of the Coal Porters” were founded in 1902.
Later on, in 1906, the various unions joined together in the “Co-operative Society for Loading and Un-loading Mineral Coal”.

In this way, a new body was created, formed by 2,540 associates and divided in four groups: porters, un-loaders, loaders and weighers/collectors.
This lasted until the 24th May 1909. Internal dissidences proved impossible to maintain the unitary assets achieved only three years earlier; from here on, the distribution in three distinct unions: the Un-loaders, the Loaders and the Porters.

A unitary experience that lasted a very short period but that nevertheless marked the workers culture permanently.
Together with the lasting of this type of orientation at the government, (that created a vast net of unions, including the one that, on the 7th June 1903, founded the newspaper “Il Lavoro”) and solidarity, that opened the canteen and the surgery for the coal workers to all the people in need.
A special merit is given to the creation of the first newspaper for the working class, promoted and financed directly by the workers, Il Lavoro (The Work), as mentioned above. All this was possible thanks to a collection of £ 6,000 Lit that the Assembly of the Coal Workers put together on the 3rd May 1903 (at the time, the coal worker daily wages were between £ 4 and £ 5 Lit).

Soon, the movement of the Genoese workers had to face a terrible task, both civil and political, represented by the First World War.
The Nation was split in Neutralists, following the principles of Proletarian Nationalism, and in Interventionists according with the tradition of the resurgence against the central empires and the irredentist claim to free part of the Italian territory (Trentino and Friuli) still under Austrian-Hungarian domain, claims of which, on a National level, Cesare Battisti and Guglielmo Oberdan were spokesmen.
The division passes through the docklands organizations and the Workers Union itself. The Union decides, on the 4th January 1915, in order to maintain a compact structure, to remain “out of questions of internal and foreign politics that descend from the conflagration of Europe… defending, from any attack, the unity of the workers movement, recognizing the most absolute right for all associates to think and act individually, in accordance with their conscience”.

Nevertheless, this fracture doesn’t stop the Dockers to remain faithful to their tradition of solidarity of class and the coal workers are, once again, on the front line in the constitution of a “Fund of Succour for the Families of the Dockers called back to the Army”.
A faith that keeps firms the principles of Internationalism.
The “October Revolution” had only started and the Dockers were aware of the serious conditions in which the Russian population is. For this reason, in the winter between 1917 and 1918, a ship (dedicated to the loving memory of Amilcare Cipriani) is loaded with prime necessity goods: medicines, food and clothes. The proof of the “Proletarian Solidarity” of the Genoese Dockers reached its destination in the dock of Odessa.

Immediately after the war, amongst the Dockers, starts a period of strong clashes and insurgences, together with continuous vindictive acts.
Soon the Fascist Movement was born, in Genoa, too.
An assault on the headquarter of the newspaper Il Lavoro, on August 1922, and a store set on fire are the warnings of the new “Corporative Organization for the Genoese Dockers”; following the principles of the Fascism, now in charge in Italy.
After the kidnapping of Giacomo Matteotti (10th June 1924) and the discovery of his body (16th August), when the wave of indignation overwhelms the whole Italian working class, 200 Dockers start a strike to protest: they were immediately fired from their duties. But it’s only 200 protesting out of all the Dockers. This would confirm the dissociation of the structure and solidity of the “working class”. In fact the secretary for the “Fascist Corporation of the Dockers”, G.B. Rosa, announced that “the corporation, whilst calling back to the reality of things and to the most rigid discipline its organized group, declares that is not longer possible, on the holy field that is the working place, to conspire politically with the intent to fool the simple soul that is the worker”.

After the “Big Chill” represented by twenty years under the Fascist Regime, the disruptions brought by the Second World War and the Resistance against the Nazi-Fascism, the Unions were born again. Not before having given their own contribution in the war for the liberation. In fact, many are the Dockers (men and women) that rose amongst the Genoese people, on the 24th April 1945 (without waiting for the allied) forcing the German troops, lead by General Meinhold, to retire, “saving the dock, the industry and the honor”, as engraved on the gold medal for military bravery given to Gonfalon of the Comune di Genova.

The Resistance started to take shape in the docklands on the 25th July 1942. It grew in extremely difficult and dangerous circumstances because is here that the German Army and their allies were based. It is for this particular reason that this became a strategic place. In fact, in September 1944, there was a need to constitute a “Central Committee for National Liberation” (C.L.N.).
The final objective of the Dockers is to save their docks; both avoiding the undermining and defending the Goods and the Plants. From this moment on, a series of actions took place towards the neutralization of explosive placed by the enemy, through the sabotage and the removal of the blasting wires. To serve these duties there were twelve squads, each comprised of ten men.

To testify the risk that was envolved inthese actions, are the personal lives of the leaders of the Resistance, recorded on the 10th January 1950 in an essay by Vittorio Cevasco, President of the C.N.L. of the Docklands of Genoa: “the action was directed by the Head of the area, Saverio De Palo (also known as Il Barese) fallen, later on, as a partisan of the “Chicero”; De Palo was substituted by Antonio Milani, that was arrested in April 1944 and died in Mathausen; then there was Rizieri Cuppi, arrested in July 1944 and deported…”

After the Liberation from Nazi-Fascism, the coal workers union took shape, again, on the 22nd June 1946, taking the name of “Compagna Pietro Chiesa”.

The coherent link with the past is not, however, broken: in June 1960, in Rome there was an attempt by Ferdinando Tambroni to start a reactionary switch-over with a majority at the government, that included the former Fascist Party of the “Italian Social Movement” (M.S.I.).
They dared to have their national Congress right here, in Genoa (and to have as their President Carlo Emanuele Basile that, as the Prefect during the occupation, collaborated with the Germans and the Repubblichini during the blitzes, the deportations and the riots that covered Genoa with blood).
On the 29th June the Union declared the “National Strike” whilst the police Forces start to converge and attack the demonstrators, but the Dockers are strongly compacted and they force their attackers to leave and, subsequently, they occupied the city center.
A month later Tambroni resigned as Prime Minister, retiring to a private life.

For the second time, a national government has being stopped in its anti-democratic intentions, by the Dockers of Genoa.

Now, like then deployed to defend the freedom and the rights in the society as well as on the work place. Faithful to those antique principles that remain absolutely contemporary; principles that, at the end of the XIX Century, the coal workers of the of the dock of Genoa, made their own, thanks to an extraordinary sensibility towards what was been experimented in the international organization of the work: in New Zealand as well as along the lagoons in Wisconsin, in Marseille or in Liverpool.

A message that ran over waters and reached docks, our docks.
The idea of “dignity of the work” had to be conjugated with the responsibility, that the ground, where the responsible dignity could grow, was the government of the time and the garrison of duty (today we would say Auto-Government), that the lever to impose humanization of the work was “mutualism” (now known with the more vague name “solidarity”). 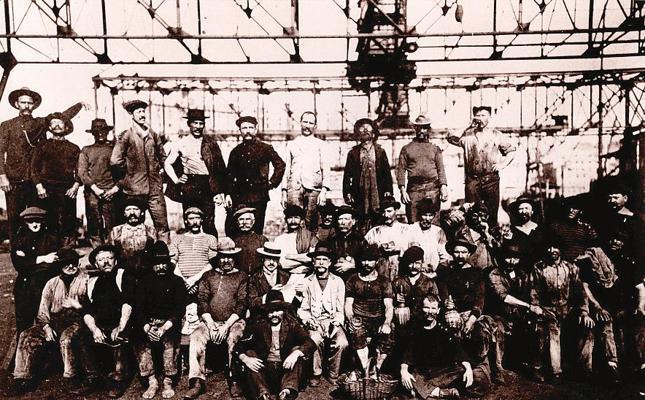 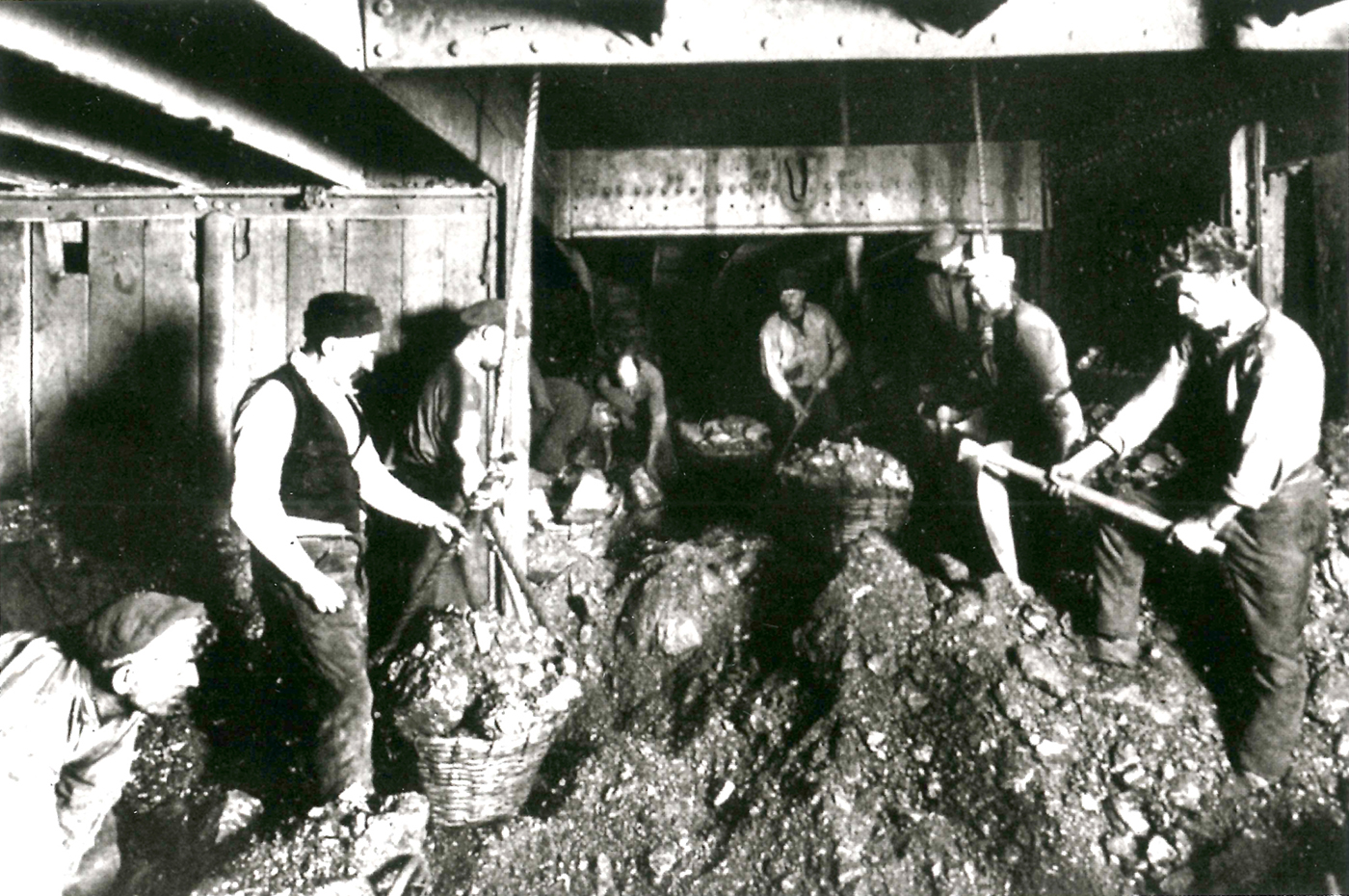 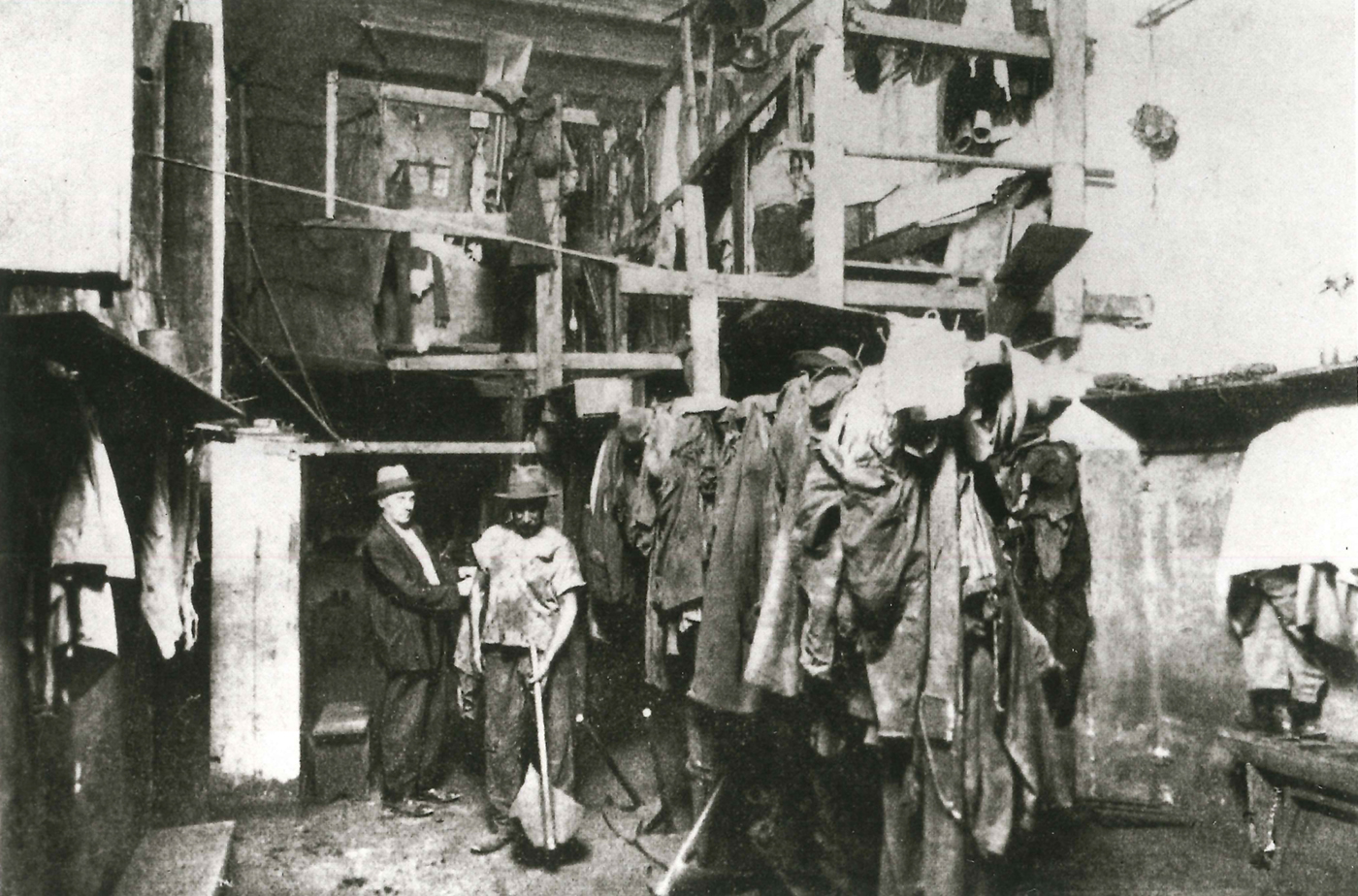 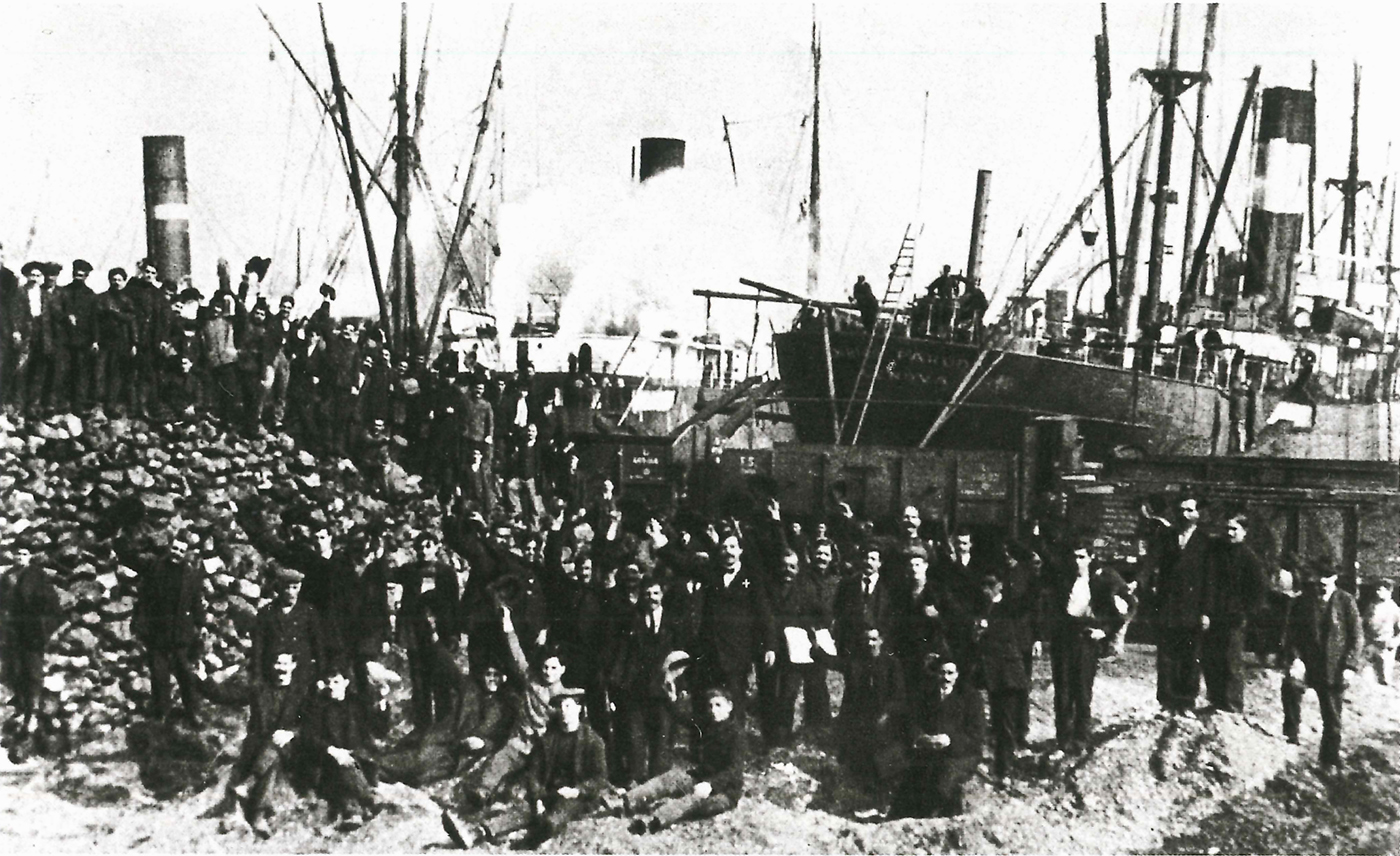 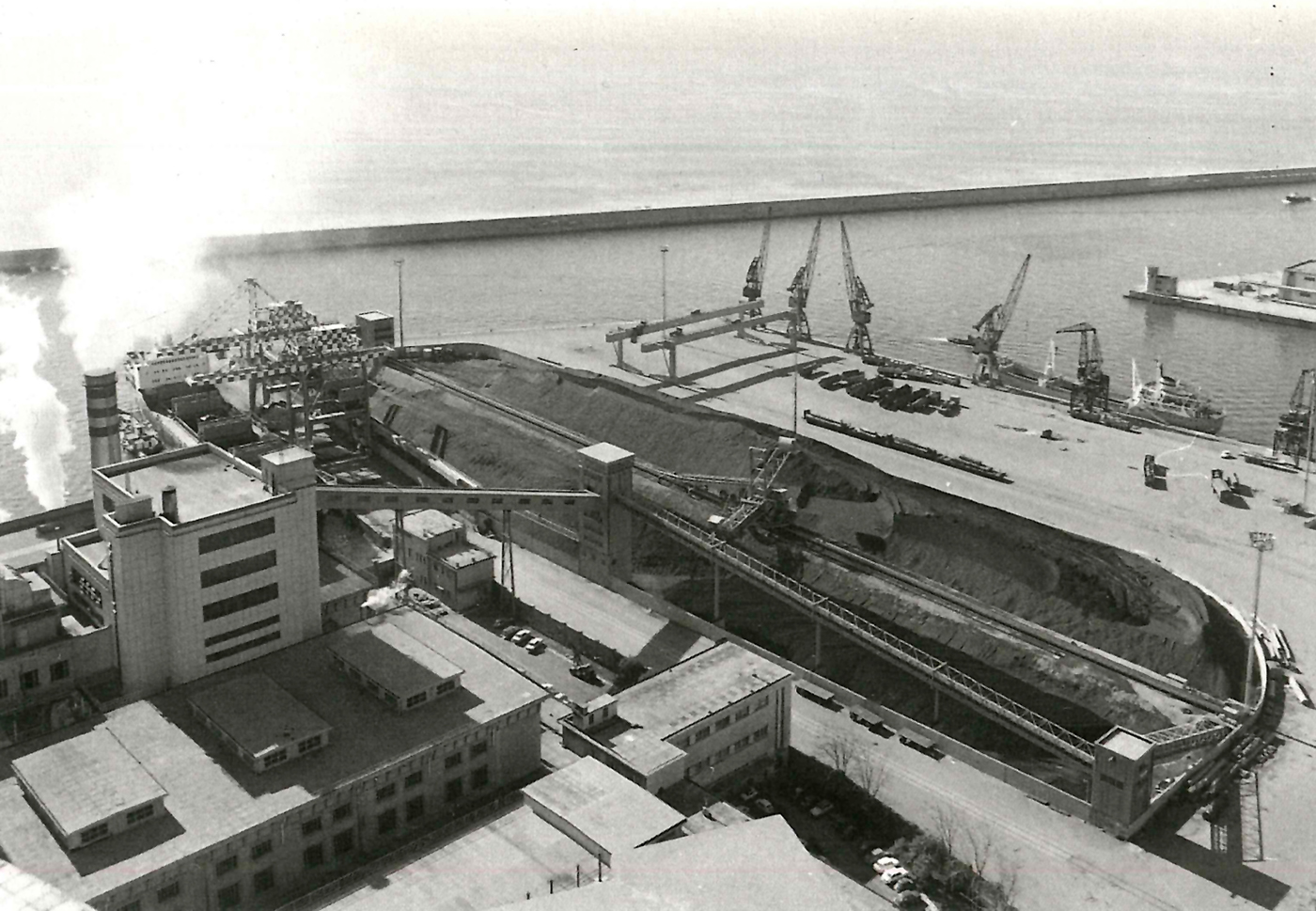 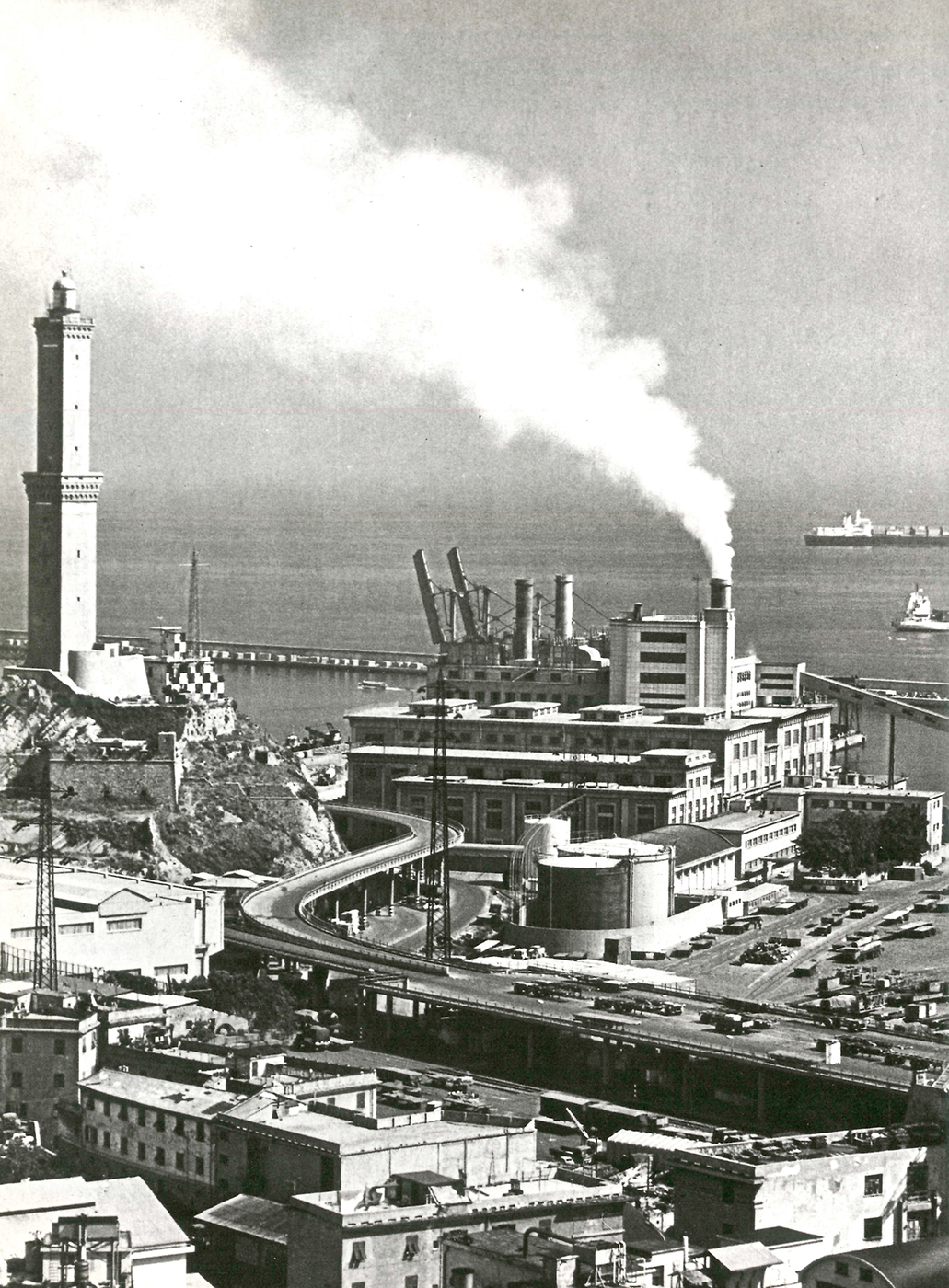